A survey carried out by Plataforma per la Llengua, the platform for the Catalan language, concludes that 82% of Catalonia's residents agree with the 'linguistic immersion' model

This means that the Spanish state must make it possible to study within a linguistic immersion system, fully in Catalan, for all pupils who so wish. The Committee of Experts that monitors compliance with the Charter has pointed this out. In its fifth monitoring report, it warned that the Valencian plurilingual education law, which imposes percentages of Spanish in education, 'makes immersion programme models impossible'. The Council of Europe's Committee of Ministers took on the experts' observations and advised Spain to 'remove the limitations' to teaching in Catalan in Valencia: a conclusion that is also fully applicable to the situation in Catalonia. Plataforma per la Llengua will examine all the legal options available to force the Spanish courts to comply with the international linguistic duties the Spanish state has taken on.

As well as breaching Spain's international commitments, this ruling goes against social and political consensus in Catalonia. A survey by statistics office GESOP from this autumn, commissioned by Plataforma per la Llengua, shows that 82% of Catalonia's residents support the Catalan linguistic immersion model. Rulings from recent years are an example of judicial activism that seeks to make changes to the people's will and replace it with certain political groups' preferences.

The survey commissioned by the NGO, which promotes the Catalan language, shows that linguistic immersion is supported by all segments of the population. Even habitual Spanish speakers are mainly in favour of this model: 68.1% of them approve of it. Furthermore, the model is widely supported all over Catalonia. In the city of Barcelona, 81.4% are in favour, while this figure is 76.4% in the wider Barcelona Metropolitan Area.

The model receives the most support in the youngest segment of the population. Practically 9 out of 10 young people - 88.1% - agree with it. This indicates that linguistic immersion is not just a policy from the past; it is also a project for the future.

Meanwhile, only 15.8% of Catalonia's residents disagree with the linguistic model in schools in Catalonia. Among those against the model, 40% argue that both Catalan and Spanish should be languages of instruction in schools. 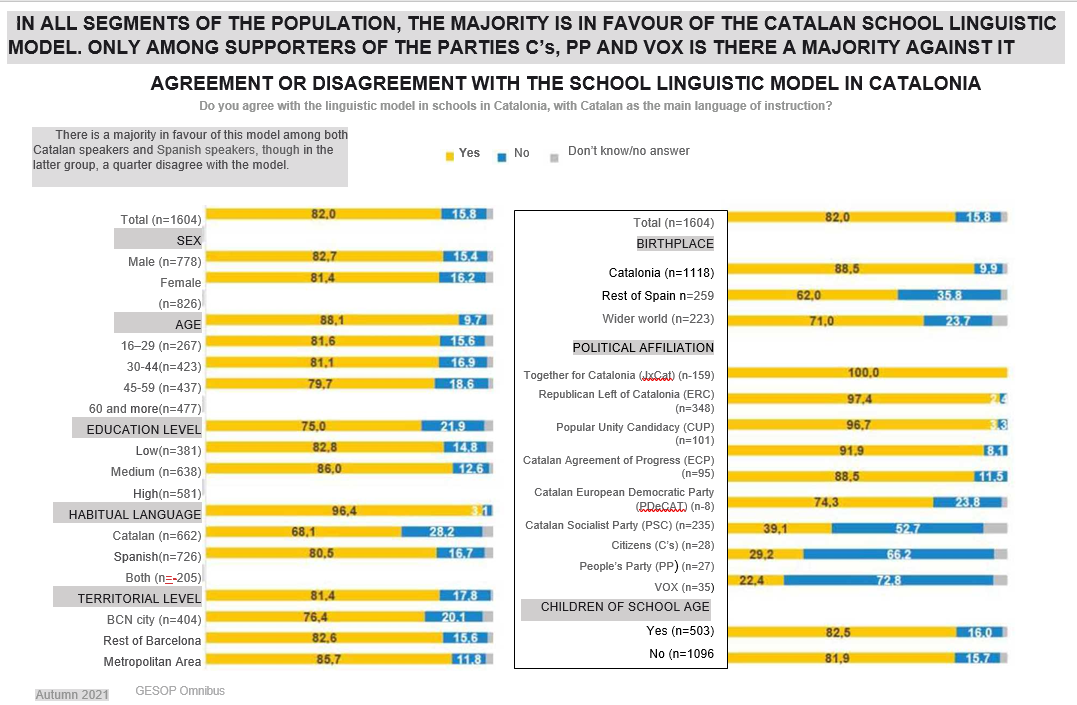 Linguistic immersion in education is not an exclusively Catalan model. Belgium and Canada are examples of countries where this system has proved successful. In these countries, where various linguistic communities coexist, it has been shown that immersion in the language specific to the place does not harm speakers of other languages; instead, it helps them to achieve skills equivalent to those of the native speakers.

Recently, the Government of Catalonia published data that indicated that compliance with the linguistic immersion model is not universal across Catalonia, and that almost half of secondary school teachers use Spanish in the classroom. In parallel, data gathered by the Higher Council for Evaluation of the Education System indicates that fourth-year secondary school pupils in all educational regions of Catalonia have a better command of Spanish than of Catalan. This demonstrates that any relaxation in the immersion model leads to a decline in pupils' Catalan language skills.

In a similar vein, two studies carried out by Plataforma per la Llengua show that 35% of primary school children in urban areas speak Catalan in the playground, while this figure drops to 14.6% in secondary schools. In primary education, the immersion model is more widely imposed, which indicates a direct correlation between use of Catalan in the classroom and in leisure time.

If linguistic immersion were a fully applied reality across Catalonia, it would ensure that all children finish compulsory education fully proficient in both official languages. In addition, immersion promotes linguistic cohesion and prevents any segregation of the population according to origin. In fact, in Catalonia, this model emerged thanks to requests from a group of Spanish-speaking families in Santa Coloma de Gramenet, who wanted their children to become proficient in Catalan and fully integrated. Education in Catalan promotes equal opportunities, as it makes all pupils proficient in both languages.