For the fourth consecutive year, Plataforma per la Llengua has made a study of the Spanish State websites - in 2020, this has been based on observations made of almost 400 sites

82.4% of sites with some content in Catalan include serious language errors and 42.9% differentiate between "Catalan" and "Valencian"

With the expansion of the internet, various public authorities, institutions and bodies now have a digital infrastructure allowing users to access all kinds of information online and carry out a wide range of procedures, processes and applications. Every year since 2017, Plataforma per la Llengua has made exhaustive observations of the websites associated with the Spanish State authorities to find out how far it is possible to access them in Catalan.

In the 2020 study, the results are just as disappointing as in the previous three years. Sites that are translated to some extent continue to account for almost one-third of the total and, in most cases, these translations are partial or residual. Spelling mistakes and language errors also continue to be a problem throughout the translations, and the promotion of language fragmentation, differentiating between Catalan and Valencia, has noticeably increased.

Because of all this, Catalan-speakers cannot carry out procedures as essential as paying their annual VAT contributions, applying for a European health card or asking for their social security working life report in their own language. 2020 has been another year when the central institutions have violated Catalan-speaking citizens' rights to access information and State public services in their own language and the situation has not improved at all. Plataforma per la Llengua has registered an official request to the Spanish Government Office in Catalonia asking for Catalan to be included on all Spanish State websites, an end to double versions differentiating Catalan from Valencian, and the mass correction of mistakes. Depending on the response and the changes we detect in future observations, we may once again report this situation to the Council of Europe.

The study by the Catalan NGO is further evidence that the policy of ignoring and neglecting Catalan has not changed despite the different Spanish governments that have succeeded one another since 2017: Mariano Rajoy's right-wing PP administration, the Socialist Pedro Sánchez governing alone, and his party, the PSOE, in coalition with Unidas Podemos. The language discrimination by the current government, which is supposed to be "the most progressive in Spanish history", is particularly galling.

Although Unidas Podemos champions a model of State that would be more respectful of multilingualism than the existing situation, they do not establish the application of this model as a priority when it comes to negotiating with their partner in government. Often, they do not even respect Catalan-speakers' rights when matters depend on their own party. For example, although the website of the Ministry of Equality, headed by Irene Montero, which was set up during this legislature, includes Catalan on the language menu, none of the content has, in fact, been translated into Catalan. It is merely a question of appearances.

Meanwhile, the PSOE is not applying policies it had demanded when it was in opposition. In fact, in 2017, through a series of parliamentary questions, the party called on the Rajoy government to make public websites include versions in the State's co-official languages. But once in power, not only have the Socialists not done what they were calling on the PP to do, they have even set up new websites in Spanish only, such as the one for Social Heating Benefits, a system of aid for fighting energy poverty. Nor is there a version in Catalan of the Spain Travel Health website, with information in languages like German and French on the safety measures required for travelling during the pandemic. As for the procedures required for travel, these can be carried out in Urdu or Bulgarian, but not in Catalan.

Also in 2017, the Socialists presented a Bill for the "recognition and protection of language pluralism in Spain" which would, for example, have allowed people to use Catalan with all the State bodies that govern us, regardless of whether the public service is provided from Madrid. Once in power, the PSOE have not gone ahead with these measures. Moreover, on 9 March, the Socialists failed to support a motion in favour of multilingualism presented in the lower house of the Spanish parliament by nine organisations, each championing the language of its territory, including Plataforma per la Llengua. One of the points rejected by the Socialists called, precisely, for State websites to have versions in all the languages of Spain's different territories.

Figures show the marginalisation of Catalan

As for sites partially translated into Catalan (in other words, those that do not allow access to all the content and services in that language, but which have the main utilities translated), the study concludes that these represent only 12.1% of the more than 400 sites studied. The figure is, once again, very similar to those for the last few years.

In 2020, more than half the Spanish State's websites with a theoretical option to browse in Catalan had only a symbolic, residual version in that language. Specifically, this applies to 68 of the 119 sites observed: 57.1% of them. These pages with residual translations have only a few fixed browsing menus and general and static content in Catalan, often on the first interface or, at best, on a second browsing page.

Besides the lack of presence of Catalan, it must also be stressed that 82.4% of the pages with some content in Catalan have serious language errors: spelling mistakes, sloppy translations, accents the wrong way round, replacement of interpuncts with full points, and so on. Very often these pages also have mixtures of languages, with the headlines in Catalan and the content in Spanish, or vice versa, or fixed and drop-down menus with some options in Catalan and some in Spanish.

Another worrying element that appears year after year is the practice of language fragmentation. This means treating Catalan as if it were not a single language, differentiating it with terms such as "Catalan" and "Valencian". According to Plataforma per la Llengua's study, in 2020, 42.9% of websites with a version in Catalan made this differentiation, with cases as alarming as the websites of the Spanish State railway company Renfe or that of the Spanish Prime Minister's official residence: Moncloa. 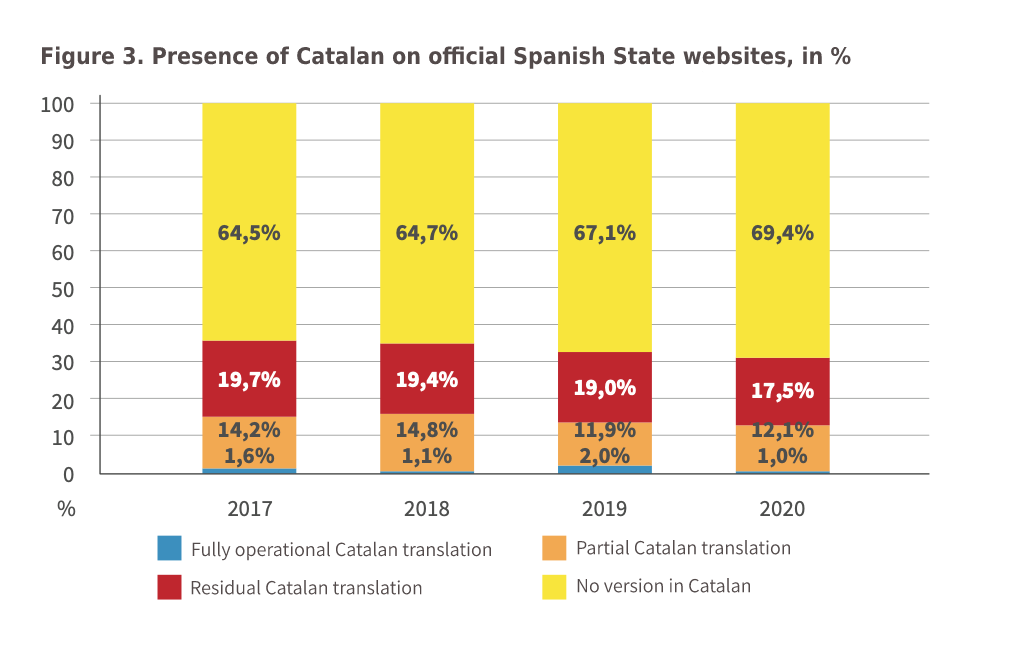 ​Spain is breaching the European Charter for Regional or Minority Languages

The ECRML is a treaty promoted by the Council of Europe and ratified by Spain in 2001. It establishes that member states must guarantee a series of rights for the speakers of regional or minority languages. For example, it determines that the administrative authorities must use these languages; that they have to be included in frequently used administrative forms and texts; and that they must be used in providing public services. Today, the Committee of Experts overseeing compliance with this treaty still considers that the Spanish State is only partially complying with these three obligations because, among other things, the presence of Catalan on official websites is partial, with room for improvement. Only the full incorporation of Catalan into the State's digital infrastructure will make it possible to consider the commitments contracted by the Spanish State when it signed the ECRML to have been met.

Catalan-speakers in the Spanish State continue to have their language rights severely restricted because, unlike similarly sized language communities (Danish-speakers in Denmark, Flemish- or French-speakers in Belgium), they are subjected to a State language policy which openly acts against them. Plataforma per la Llengua continues to carry out studies demonstrating the discrimination suffered by Catalan-speakers and will continue to lead actions to promote language equality.